I saw this article and that it was awesome.  A father and daughter move from Minnesota to Sweden a year ago. On a beautiful summer day down by a lake the girl was swimming then she yells at her dad I found something. When she came up to the surface with the object it was a sword fully intact.

So they call the local history museum and they said it much older than the Viking era. They said it was dated back to the 5th or 6th century. The Viking era was in the 8th century. The sword well preserved in the lake for about 1,000 years or so. Sword is about 2.5 foot long in the scabbard which it was made out of leather and wood.

But the 8-year girl donates the sword to the local history museum which they will keep for a year for studies before they will put it on display.  To me, it sounds like it would be in the Viking era. I would say that is an awesome found as a kid. 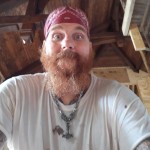